There are so many great teaching aids and tools that can make teaching STEM subjects fun, engaging, exciting and interactive for all ages. And many come with fantastic teaching resources; with lesson plans linked to curriculum outcomes, worksheets and teacher guides. These resources are of great benefit, particularly to teachers new to coding and robotics.

Sphero is a powerful teaching and learning tool that is lots of fun and can be controlled by an iPad or smartphone. Students of all ages love it, and when I have brought it out at teacher training courses there has been much excitement! You can program it to steer around obstacles, go up ramps, light up colours and even dance, while learning about geometry, speed and distance and having a lot of fun with problem-solving. There are accessories such as protective covers, chariots and ramps, or have students make their own obstacles. The Sphero SPRK is particularly good for education, as it is clear so you can see the inner mechanics. 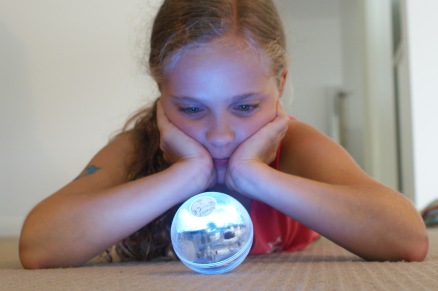 Sphero have also made the BB-8, which is a smaller version of the popular robot from the Star Wars: The Force Awakens film. It is cute and uses similar Sphero technology. Initially BB-8 was only controllable and not programmable, but apps are being updating and you can now program BB-8 with code using the Tickle app, and apps such as Draw n Drive also work with BB-8 now. It also has some extra features such as Holograms with AR and responding to voice commands.

LEGO Mindstorms EV3 is a fantastic robotics and programming kit aimed at students aged 10 (Grade 5) and above. There are so many possibilities, and students can start with the lessons and follow the step-by-step building instructions, and then progress to the challenge of making and designing their own creations, using sensors such as gyro and colour. They learn so much about programming and engineering whilst having a lot of fun. They can also get involved in the First Lego League (FLL) with enquiry-based learning team challenges.

LEGO Education have recently announced the WEDO 2.0 – a robotics and programming kit aimed at Primary School aged students (Grades 2-4) that would be a great lead-in to using the LEGO Mindstorms EV3. I look forward to trying it, and, as with EV3, it comes with great curriculum resources.

Robotics and coding are a great hands-on way to get students enthusiastic about maths and science, while having a lot of fun while they learn!

< Previous Next >
+ Add your own event Eventbrite

"This has been the best course I have attended. Very useful information to take back to my staff in Visual Arts. The whole faculty should do this course."

"Excellent presenter. Great information. Well organised - engaging ALL day. One of my best inservice that I can go away and use back at school."

"The course is relevant, classroom-orientated and complete with fully interactive, take home digital resources. Bev is an inspiration. A day well spent."

"Excellent presenter!! Very knowledgable!! Great ideas I can use in classroom. Good to have a teacher current with technology on iPad!!"

"Absolutely fantastic! Such a huge range of ideas and knowledge. There were a LOT of useful apps introduced and there was no way you could leave the course with no new ideas."

"Excellent content and the small group meant we had a lot of individual help with iPads and apps. Interesting and engaging presenter."